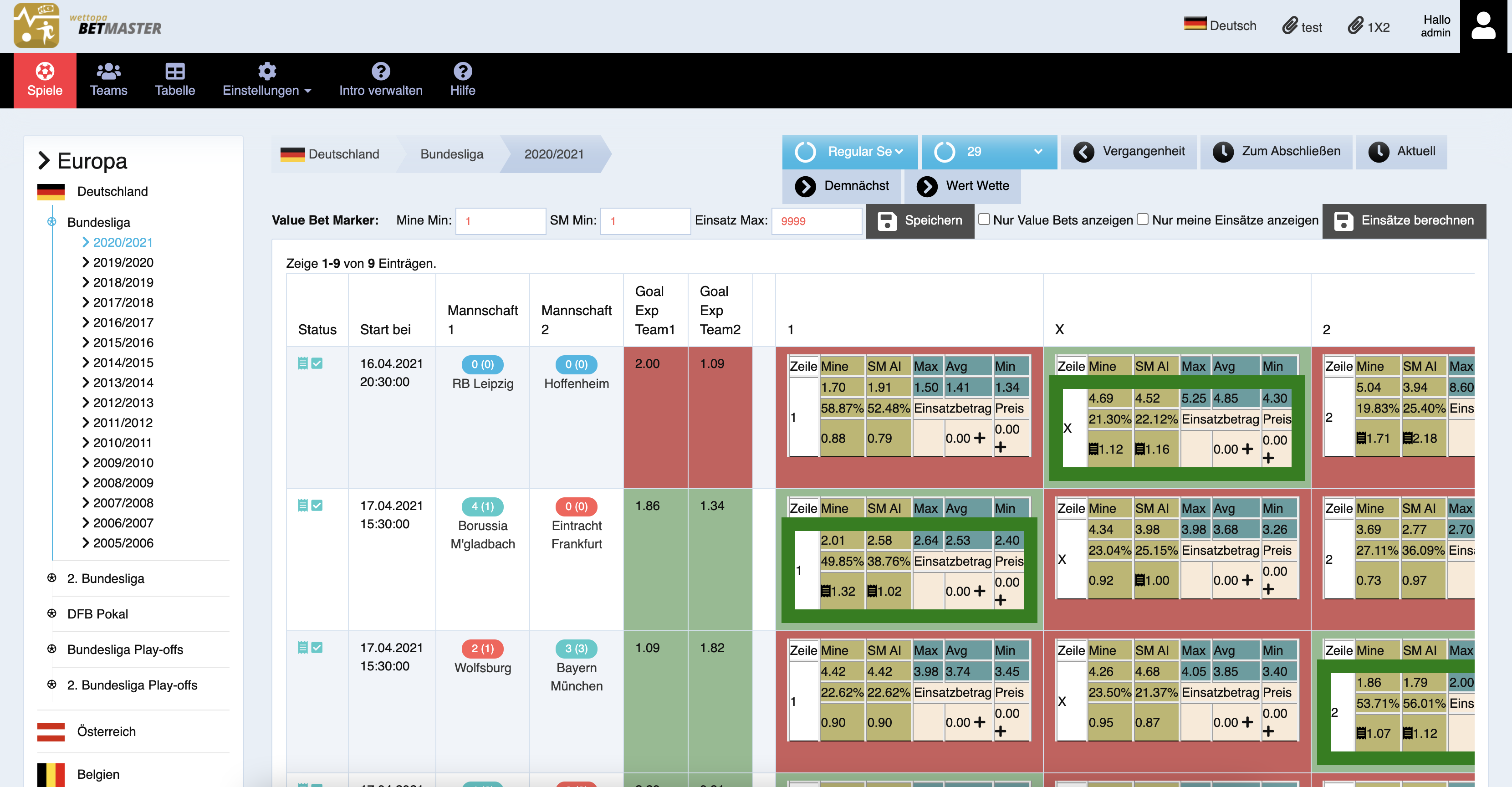 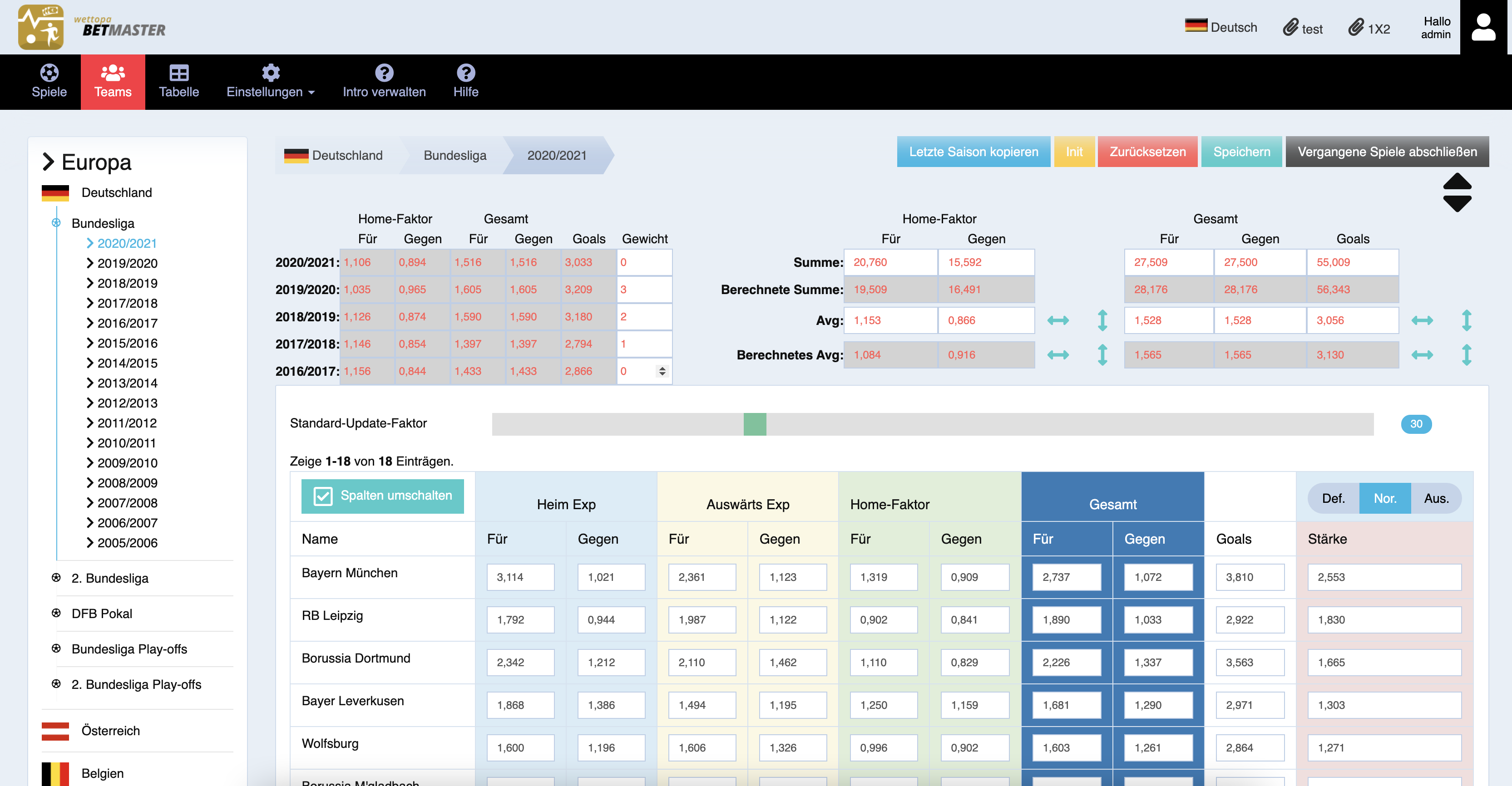 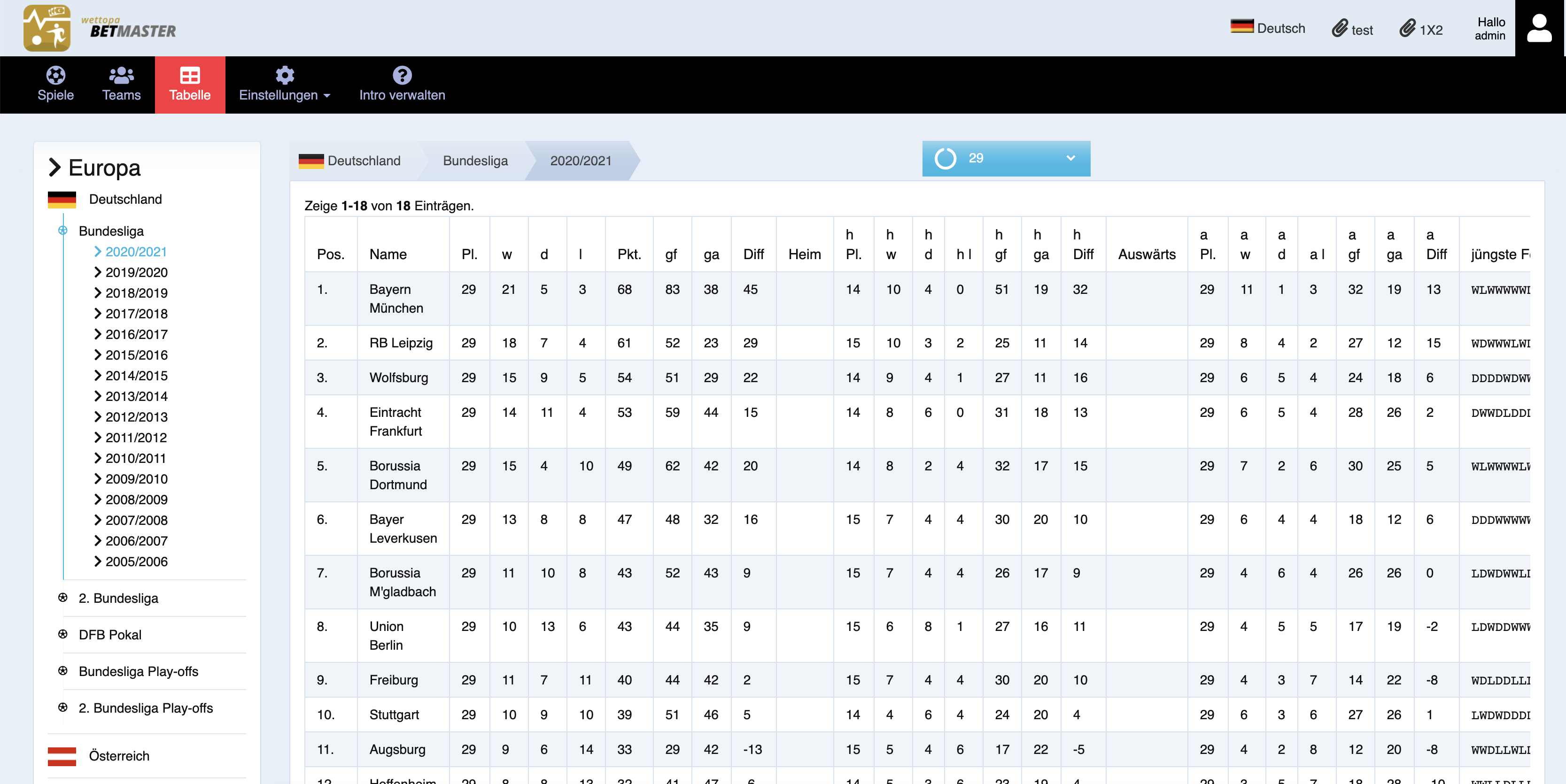 Betmaster Wettopa Autocompiled values for over 100 leagues (click for Fullscreen)

The author had the idea for the betmaster in early childhood. Even back then, he developed a passion for football and statistics. He was particularly impressed by the realistic simulation of soccer games and entire championships.

In the computer age, it was possible to gradually expand the variant, which was once only intended as a “realistic game form”, into a veritable tool for calculating game outcomes. With the possibility of competing against the increasingly prominent betting market with these calculations at the same time, it became the program used to this day for the 1990 World Cup, with all possible further developments, of course. The algorithms have basically held up, the joy of playing has remained, the tool also proved to be powerful against the providers.

The current version, which is still in use by the author, is now to be replaced soon. And from a tool for everyone. So you should also have the opportunity to let your “joy of playing” run free – and never lose sight of the fact that it can and should really be about real money. That is when it is possible to track down the errors that are definitely there. These “errors” always occur when a rate is too high in relation to the probability of occurrence. And such things are definitely done.

Well, you have a few parameters that have to be set and that ultimately control the whole thing. The most important parameters include the team strength settings. Anyone who finds good settings here should be amazed at how close the quotas calculated by them will be to the provider quotas. But if there are deviations – this is likely to be the case occasionally – you have the option of adjusting the settings or trusting your own. If you trust your own, then you would probably very soon have a betting recommendation here and there, which the computer throws out with the aid of its own parameter settings.

This is desirable – after all, we want to indulge our joy in playing and live it out – but at the same time it is by no means the sure way to earn some additional income. Because: there is still no evidence that one’s own attitudes can assert themselves against the betting market. Long-term statistics can provide information here, which the well-considered player might prefer to make before going on the market with real money. But each his own.

Let’s now assume that you have found decent basic settings that you are satisfied with. As an example for the 2020/2021 season, first Bundesliga: is Hertha or Wolfsburg the better team? There will surely be a few voices for this and a few for it. In other words: there is no truth about it, there is a little bit of speculation, but the “true expert” – who of course you are all – will form his opinion and represent it competently and vividly. At the same time, would he risk a few euros if necessary? Why not? You know your way around.

Further in the text: you would have found your settings, which inevitably have to be made before each new season. It is an initialization that is required even if the tool has been used for years. For example, newcomers and relegators? What about the summer transfers? Who has grown properly, who had to give up a few regular players, who has the great talent on the line? Each of the experts gathered here should do all of this in their heads before each season. With the betmaster he has the opportunity to convert this into tangible numbers and, speaking of “convert”: the word in its original meaning: converting it into money. So with the help of the carefully considered settings you can actually earn money ?! Well: a) they have to be really good and b) there is still the element of chance, which is commonly described with the words “luck” or “bad luck”, and which is so infinitely difficult to get hold of. Unless you have the betmaster, who can even give you information here: who has been lucky or unlucky over the course of the season?

But let’s leave this aside: you have your basic assessments and the season starts. Now come the famous “surprises”. The climber wins in a league competitor who is rated much higher. What does this mean for the assessments? If you were “wrong”, is the newcomer better than you thought, did the favorite only have a bad day here and today, was it luck, this victory, or was it even deserved? All of these considerations can be represented in betmaster with the help of numbers. The computer would just start working on its own. He adjusts the skill levels based on the results.

Now, however, he only does this on the basis of his own regulations. That’s the way computers are: reliably so far, because they do what you teach them, just pretty stupid. You also have your control options here. These are again a few parameters, here the so-called “update parameters”. With the help of the setting, everyone can control for themselves to what extent the individual, surprising (or “completely normal” results, as they may appear) should have an impact. Would you like the computer to adapt quickly, which would mean that you would have relatively little confidence in your own assessments, or should it rather adapt slowly, which would mean that you regard the surprises as simple random events that have no major influence supposed to be based on future calculations. All of this would be left to the user. With the help of the gradually developing experience, he can get an idea of what he is doing better with. The only important thing here is to understand that nobody knows exactly and that the providers themselves only guess the odds.

Now the assessments of the season would develop on their own, accompanied and controlled by your own parameter settings, but also with the omnipresent possibility of lending a hand here and there and adjusting something.

If you want to calculate a single game, you can do this first via the basic settings of the teams, which also includes the home advantage, but then according to goal expectations that come out for a game, and finally via a simulation, which you can either use standard settings or even can also influence it with your own smaller adjusting screws and then let it run through. These smaller possibilities should consist in the fact that you can control the game behavior of the teams a little. That means: both defensively, one offensive, one defensive or the playing behavior if you are behind, when you go on the offensive, for example, or to what extent this or that would be satisfied with a draw. All these smaller settings would have such an effect in the simulation that the victory and draw probabilities would be changed (to a lesser extent), but also, for example, half-time final score probabilities. If, for example, both are expected with a more cautious approach – for example a game in a relegation battle – then this could make the half-time draw more likely and one would perhaps find an interesting betting opportunity there? Even a game with the character “both need a win” could occasionally occur and then have a significant effect on the draw in the end result, but also on the goal expectations (which ultimately essentially reflect the circumstances).

If these possibilities get over your head: the computer would also deliver quite decent results with its own settings.

As you should have noticed by now: the betmaster offers the possibility to use all markets. You can play on the traditional 1 — X — 2 market (that is, it delivers numbers in the form of probabilities that form the inverse of the fair odds), as well as the Asian market. He spits out results for the goallines (the famous over / under or also called over / under), he offers numbers for classic result bets or half-time final score, both sides hit or whatever is desired by the user.

Another function will be the long-term bets. Here you can calculate the chances for the German champions, for the Champions League qualification or for relegation week by week – based on your own settings – and thus find bets on your chosen favorite or against your unloved rival (Schalke is relegated , I tell you!).

There are also a total of three ways to calculate the games. These should be implemented gradually. Here is a brief description:

The first is the classic calculation method that was already used in the original tool, in the absence of serious alternatives. This was based on the goal expectations as well as the results, which were updated for the game strength adjustments. Of course, we must never ignore the values of home advantage, average goals and the “draw factor” (the draw factor has always controlled the tendency of the teams to accept a draw when the score is even; the famous “safety variant”: no more risk taking , Secure point – we all know, or).

In the second method, the game statistics are included. That means: the result does not always correspond to the course of the game or the game conditions. Given the game stats, are you trying to eliminate some of the luck that may have caused the game outcomes? In any case, it is not uncommon for the worse team to win. Sometimes with a good game, sometimes with luck. The favorite actually did everything right, but lost anyway. If such “luck factors” often turn out to be in favor of one team or to the disadvantage of another team, one would already find values that differ from the first version. That means: with this system, the computer would evaluate the chances of the team more often affected by bad luck for the next game more favorably than the first system, that of the team more often affected by luck less favorably. One can doubt this or declare it right. In any case, you would have a kind of “second opinion” that would still only come from computers. It virtually competes with itself or offers the user the opportunity to lean in this or that direction. Which system do you trust more: the bare result football and thinking or do you have a soft spot for the unfortunate losers, with whom you can just as easily identify if you just feel into it?

The third method would be to use the original Elo system to approach it. The methods used here are superior to the Elo system. Basically, however, the chances are awarded according to the principle: percent for team 1, percent for team 2, in total these two at 100%. Draw? The system does not know anything about this. Goal Expectations? The system does not know anything about this. Both could, however, be calculated from this in retrospect. This system is quite powerful and can even ensure that international comparisons and other cross-league comparisons can be made much better, but has the disadvantage: it has not yet been implemented, but is at least planned as an outlook. ipsum dolor sit amet, consectetur adipiscing elit. Ut elit tellus, luctus nec ullamcorper mattis, pulvinar dapibus leo.